Good evening. It is an absolute honor to be here. When I arrived in America six years ago, quite literally “fresh off the boat,” I never imagined I would be standing here. When I first stepped foot on Troy’s campus, I was entirely clueless about my future. Now, speaking here at graduation, I know exactly the direction I'm going in life! Just kidding, I’m just as clueless as freshman year, but I do know that my experiences at Troy will serve as the foundation of whatever I decide to do in the future.

The past 4 years have been enlightening to say the least. I cannot count how many Spanish presentations I made (well at least now I know 15 is quince and not diecicinco), I learned that sometimes diamonds are produced from the pressures of procrastination, and who would’ve thought that the difficult times at Troy might actually bring people together!

But I figured, since we’ve all seen the once clueless freshmen mature into aspiring models, journalists, entrepreneurs, and engineers, (oh and did I forget doctors?), since we’ve all witnessed how eye bags grow exponentially on the daily during the college app season, and since we’ve all heard about how we are “the worst case of senioritis” Mr. Rod has ever seen; so today, I would like to share some lessons I learned through the journey of high school with my fellow classmates, because it’s 2019 and sharing is caring.

The first lesson is that you are what you love, and who loves you, but not who doesn’t love you. As a first generation immigrant, I used to be extremely self-conscious: of my appearance, of my slight accent (and my inability to English in general — to this day), and of anything that seemed mildly un-American. But through the past four years, I learned that really, it doesn’t matter all that much. We all make mistakes and have our deficiencies, and that’s ok. A part of life is mastering the art of losing, losing the perfect image, losing that A+ in Fundamentals of Computer Science, and, most importantly, losing snapchat streaks.

As the contemporary poet and metaphysician Taylor Swift once said, we shouldn’t care so much if we feel misunderstood by a lot of people who don’t know us, as long as we feel understood by the people who do know us, who will show up for us, who see us as human beings. Sometimes I think it’s fearless to say goodbye to a situation that’s exhausting or toxic, and oftentimes, by leaving things behind and being yourself, you will find much broader horizons.

The second lesson is to build yourself up strong but humble. Surround yourself with positivity and support. Know that criticism doesn’t have to defeat you: it can strengthen you instead. We’re all different, and although it might not seem easy to get past the things we don’t always understand, remember that it is absolutely possible. And when you’re under attack, just think that the people who carry such negativity often have rather tragic lives themselves. So next time, pity them instead. Nobody is perfect, but humility always goes a long way.

I know, personally, that when Harvard University intimately tells us that they regret to inform us, or when Mr. Kim puts in that 0% on the acid-base titration Iodine Clock test, or when the all-nighter to cram the entire novel Frankenstein is no longer sustainable even with multiple cups of coffee, it can seem like the end of the world. But I also know that rejections are natural to the human experience, and that in the long, long marathon of life, obstacles will show up every step of the way.

But don’t ever let those obstacles sidetrack you, because it may be a fight to live an interesting life, but it’s a fight worth fighting for. Because if we are brave enough to chase after our ideals with unwavering determination, then there is a chance that we’ll succeed. Because I know that someday, when we get to where we’re going, the stories we write will be worth telling, and retelling, and listening to.

So don't become discouraged when the suffocating reality comes crashing down. Sometimes dreams are broken to make space for new ones. They represent a direction, but they’re not always the destination. Perhaps we don’t grow toward them, or for them. We grow to exceed them. Maybe we’re not quite ready for them today, but I know we’ll be ready someday. If we don’t get there, we’ll get somewhere. And I hope that the belief in someday, the dream of somewhere, will be our solace in midst of the ceaseless cluelessness of life. 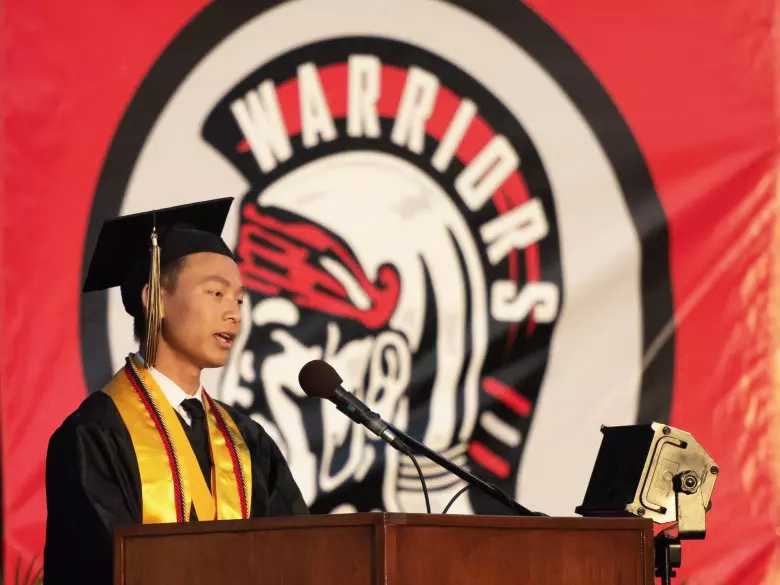 Delivered May 31, 2019 at Troy High School's Commencement Ceremony as valedictorian for the Class of 2019.